Conferences to Converse My ‘Verses’7

As a student, I was required to publish at least one research and present it in a seminar or conference before graduating the program. Then, I decided to take part in The 5th Atma Jaya International Conference on Translation & Interpretation Studies held by The Applied English Linguistics, Faculty of Education and Languages of Atma Jaya University on 22 August 2015. Accompanied by three of my fellow workers, I participated in the conference as a presenter to present my small research titled “A Corpus-based Study: Analysis of the Use of Lexical Collocation in Indonesian-English Translation of Museum Exhibit Labels”. Shortly, the event went well and my presentation went smooth, considering me as a first timer speaking in an international-scale conference.

Hmmm..I guess we better move to another story of another conference.

This time, I went to a two-day international conference named “The 2016 International Translation and Interpreting Symposium” held by Faculty of Humanities, Universitas Indonesia from 12 to 13 August 2016. But, in this event, I came only as a participant with my coworker Mei Lia who also possibly writes about her experience joining the symposium. 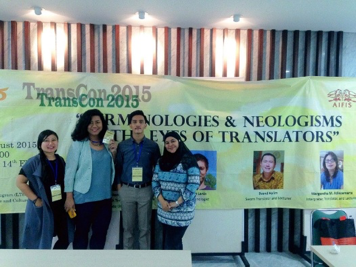 The symposium discussed the theories and practices in the world of translation and interpreting. It consisted of plenary and parallel sessions. The plenary sessions presented several keynote speakers (https://goo. gl/yohSgw) including Prof. Sue Ellen Wright, Ph.D of Kent State University, USA and Evand Halim, M.Hum. of Atma Jaya University in the first day. Ellen discussed a topic of “Integrating Instructional and Professional Best Practices Throughout the Translator Training Environment”. Meanwhile, Evand Halim presented “Terminological Issues in Legal Translation”. In the following day, the plenary session presented David Deck, BA., Dip. Ed. of RMIT University, Australia who talked about “Training Interpreters: What Should We Teach, Why, and How?” and Margaretha Adisoemarta, M.Hum. of Indonesian Translators Association (HPI), discussing “Interpreting Skills and the Teaching Thereof: Building Links Between Theories and Practices”. 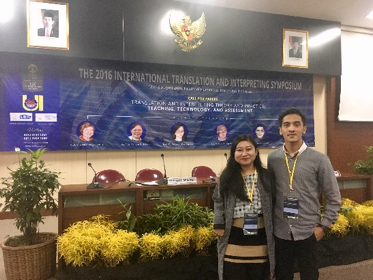 However, the presenter and the participant were allowed to have further discussion after each session was concluded, giving opportunities to discuss the topic more deeply in a more relax circumstance. Making use of the opportunity, I managed to talk to several professionals, discussed translation-related topics, and of course, made friends.

The two-day symposium had given me many priceless experiences, from gaining new knowledge to meeting new people. Above all, and to conclude the story, from many lessons learnt during the symposium, allow me to cite two most favorite quotes in the event:

“ A translator should have the brain to understand a complicated text and quickly discern the "logic" of the text to be translated “ – Hoed (2006: 25)

Learning By Doing at its Best in Trendreader - Intership Program

How Social Media Monitoring Can Help Your Digital Campaign

Steps to a Social Media Strategy

Employees Dedication and the Art of Applying Familial Working Environment

A Tale of Visual Story Telling, Values, and Branding

"From Newbie to New Me"